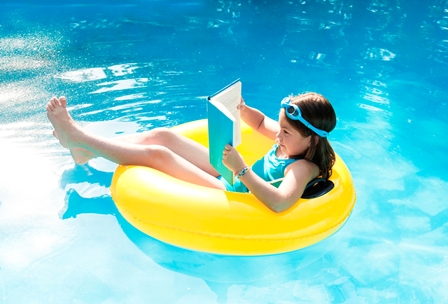 All students entering 7th and 8th grade are required to select one novel from the EWG JHS Summer Reading List to read over the summer.

Students will complete the novel prior to the start of school and be prepared to engage in meaningful discussion upon their return. Though we appreciate that many students like to start their assignments right away, we suggest that students read the novel later in the summer, so that the details of the book are fresh in their mind during the first few weeks of school.

Students should review the questions on the graphic organizer (see document on this website) prior to starting their novel.  While they read, they should record thoughts and key facts on the organizer. The graphic organizer will be collected during book talks at the beginning of the year.

Bonus - There are many great books on the book list.  If students read 3 novels and complete 3 graphic organizers, they will receive a free admission to a Student Council event of their choice during the year!  Please note these are  ALL Middle School Book Award selections if you are completing journals for next year’s book battle!

Enjoy your vacation and happy reading!

Please note:  Not all books are appropriate for all readers; ALL the selections come in ebook form through the SORA app.

Link to Assignment and Graphic Organizer

In modern-day Pakistan, Amal must fight to regain her freedom and

dreams after she is forced into indentured servitude. Realistic Fiction.

City of Ghosts by Victoria Schwab*

Since she almost drowned, Cass has gained two things: the ability

friend, Jacob - who happens to be a ghost. Any hopes for a normal

summer are dashed when Cass and her parents go Scotland to

investigate the world's most haunted places. As it turns out, Cass's

The Epic Fail of Arturo Zamora by Pablo Cartaya*

Can Arturo save his family’s Cuban restaurant and Miami

neighborhood from a flashy (and wealthy) developer? Will he get the

girl? Or is it all just an epic fail? Realistic Fiction.

Teddy Youngblood gets injured and falls into a coma after football

practice. Teddy’s family, friends, and community wants to know if it

was just an accident - or was it done on purpose? Readers are able to

This graphic novel tells the story of Ebo, an orphan from Ghana, who

follows his older brother to seek asylum in Europe. Their epic

journey alternates between present and past as it depicts the brutal

journey of asylum seekers across the Mediterranean.

Insignificant Events in the Life of a Cactus by Dusti Bowling*

Aven was born without arms, a fact that’s only the second-most

interesting thing about her. The first is the fact that she and her

where new friends – and a mystery – await her. Realistic Fiction.

Kenneth is one of many children evacuated from London to escape

the Blitz during WWII. But when the ship that was supposed to take

them to Canada is wrecked, the children find themselves in a fight for

survival they never imagined. This story is based on true events.

The Parker Inheritance by Varian Johnson*

When Candice and her neighbor, Brandon, discover a mysterious

hidden fortune - and uncover injustices from their city’s past.

The Truth as Told by Mason Buttle by Leslie Connor*

Mason Buttle has always been a bit of an outcast, but after his best

friend was killed in Mason’s own backyard, life has gone from bad to

worse. With the odds stacked against him, Mason will have to fight

back against a suspicious town with the only weapon he has: the