STEVEN KELLOGG - ABOUT THE AUTHOR 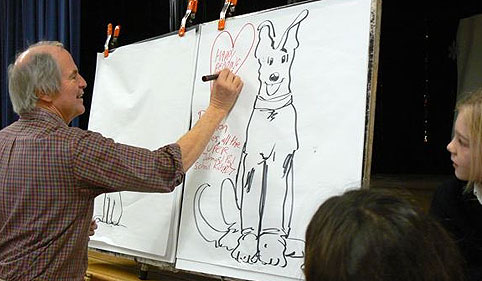 I have loved picture books ever since I was a child. The illustrations of Beatrix Potter and N.C. Wyeth were early favorites, and I always found any kind of animal story irresistable. I was an enthusiastic young artist as well, and I formulated pre-school plans to make drawing the center of my lifetime career.

I used to dream up stories and illustrate them for my younger sisters, Patti and Martha. We called the activity: "Telling Stories on Paper." When it took place, I would sit between them with a stack of paper on my lap and a pencil in my hand, rattling off tales and scribbling illustrations to accompany them, and passing the pictures first to one of the girls and then to the other. I enjoyed these storytelling sessions enormously and I usually persevered until my sisters were too restless to sit there any longer, or until they were buried under pieces of paper.

I scribbled my way through elementary, junior- and senior-high school, and afterward I attended the Rhode Island School of Design, where I majored in illustration, and where I was particularly intrigued by the few projects we were given that related to the creation of picture books. I was fortunate enough to win a fellowship that made possible a senior year of work and study in Florence, Italy. It was an exciting and fulfilling period for me, and I find that I draw constantly on the experience and images that I stored during my time there.

Upon my return to the United States I did some g

raduate work and teaching at American University, and at the same time I began submitting picture book ideas to various publishers. It was an exciting moment when the first acceptances came in, and I realized that I would be able to "tell stories on paper" full-time and to a much larger audience. I loved the challenge of putting the firstbooks together, guiding them through the various stages of the publishing process, and then watching them disperse into the lives of their readers. And now, twenty-five years and almost ninety books later, I still find every aspect of my involvement just as absorbing and enjoyable.

Click Here to view a photo of the 'Real Pinkerton' and Steven Kellogg.

During the time that I've been working on the picture books,I've lived in an old farmhouse in the hills of Connecticut which I've shared with my wife, Helen, and where I've raised six stepchildren, to whom most of my books are dedicated. Also in residence have been numerous dogs and cats, including a beloved harlequin Great Dane named Pinkerton, whose stubborn unadaptability during puppyhood inspired the book Pinkerton, Behave!The heroine of the sequel, A Rose for Pinkerton, was our senior cat, Secondhand Rose, an independent old grouch who was born a wild thing in the Catskill Mountains, and who devoted her long life to harassing everyone in the world, including Pinkerton.

The ideas for the other books come from lots of different sources, but most of them have their roots in feelings and images that I retain from my own childhood. I try to blend illustrations and the words so that each book is a feast for the eye and ear. I want the time that the reader shares with me and my work to be an enjoyable experience - one that will encourage a lifetime of association with pictures, words, and books.

Steven Kellogg talks about the art of the picture book
The picture book is an art form that is designed specifically for children, but I feel that it can be appreciated and enjoyed by all ages. For centuries a distinguished tradition of illustrated books and manuscripts has existed of which the picture book is a part. It is a synthesis of literature and the visual arts, and the relationship of the written word and the picture is its essence. I am fascinated by the ways in which the picture book can borrow and combine diverse elements from other art forms to achieve startling and moving effects. The turning page, for example, gives the illustrator the chance to utilize the elements of surprise to advance the movement of the story, and to deepen the involvement of the viewer in much the same way that the theatrical director uses the revolving stages or the rising curtain between the scenes and acts of a play.

An awareness of movement is extremely important in the conception of a picture book. My favorite illustrators delineate their characters so that animation is implied. The individual spreads are designed so that they crackle with graphic vitality. The characters seem to speak, cavort, and leap from the page so energetically that their life and movement are totally convincing. The moving qualities of each picture are heightened by the placement of the turning pages within the unfolding narrative and by the conception of the book as a whole. It is here that one sees the relationship between the arts of picture book design and film making, as both of them deal with the phenomenon of "moving pictures."

No one will deny that language can be musical, and certainly visual images can suggest different forms of music by the feelings that they convey. The musical qualities of the pictures and the words can be orchestrated by the artist as he moves them across the pages of the book. Rhythms and harmonies can be established on some spreads, and atonal effects or dissonances can be introduced on others.

There are limitless possibilities available to the artist, who sets up relationships and tensions between the illustrations and the text, allowing magical discoveries and subtle revelations to emerge in the areas between. When this happens, there is an uncanny fusion of all the elements, and the dynamic new expression that is created introduces young readers to the world of art. © Copyright Penguin USA