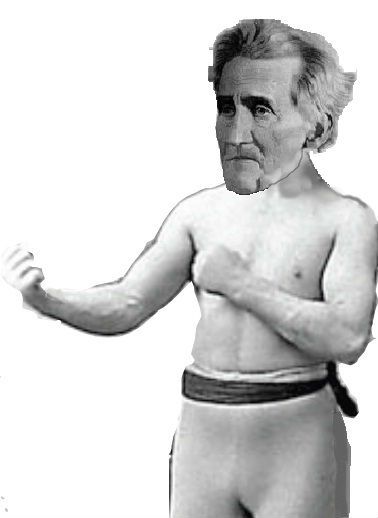 Andrew Jackson was by far the most dominant political figure of first half of the 1800s. He created the spoils system; opened millions of acres of Indian lands to white settlement; and vetoed the charter of the Bank of the United States. When South Carolina asserted the right of a state to nullify the federal tariff, Jackson made it clear that he would not tolerate any attempt to resist federal authority.

Andrew Jackson was also known for his combative personality – some say he fought over 100 duels in his lifetime, many over insults made upon his wife. He also made countless enemies with the opponents he took on politically. You will be analyzing one of Jackson’s feuds and creating a Boxing Fight Card to represent that quarrel.

A Fight Card is a poster advertising a boxing match between 2 opponents. Your digital fight card should be created online and feature Jackson against one of the “opponents” below along with all of the following information:

Select one of the following “fights” Andrew Jackson was known for. Use the link provided to start your research, but you should also use additional sources to create your fight card.