Rising: Dispatches from the New American Shore - Interviews and Discussions

Thanks to the generous support of the Rhode Island Center for the Book, the EGHS Library has 25 copies of the book Rising: Dispatches from the New American Shore, by Elizabeth Rush, available for check out to faculty, staff and students.

For over 18 years, Rhode Island's only One Book One State program focuses on a single book selected to stimulate meaningful discussions across our state.

Please stop by the library to check out a copy of the book and to sign up to participate in our Breakfast with a Book discussion group to take place in late April.

Join the University of Rhode Island’s Metcalf Institute and the Rhode Island Center for the Book’s Reading Across Rhode Island program on May 3 at 2pm for Rising Waters: Stories from America’s Frontline – a film screening and conversation with Elizabeth Rush.

The webinar will begin with a screening of the powerful short film, Home or High Water. After the screening, Pulitzer Prize finalist Elizabeth Rush will share her experience in coastal communities large and small, from the storm-ravaged eastern shore of Staten Island to the disappearing bayous of Louisiana. 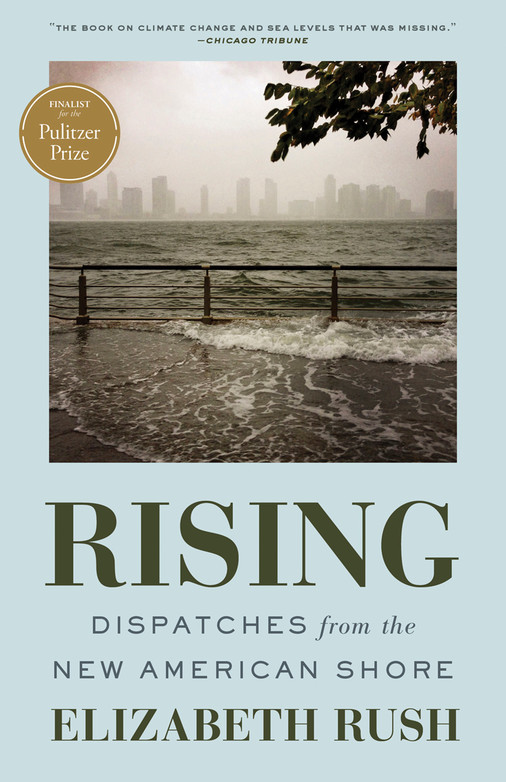 In episode 58 of America Adapts, Doug Parsons talks with author and lecturer Elizabeth Rush, of Brown University. Elizabeth is the author of the upcoming book, Rising – Dispatches from the New American Shore.  Topics discussed in this episode:

In this episode of the podcast, Elizabeth Rush reflects on climate change as a transformational force on our landscapes and the words we might use to grasp this shifting reality. Her book Rising: Dispatches from the New American Shore was recently nominated for a Pulitzer Prize for its rigorous reporting on America’s vulnerability to rising seas. This narrated essay is an account of the days she spent driving through the Pacific Northwest while on a tour for the book—a time of wildfires, loss, and possible futures.